By: The Composting Collaborative 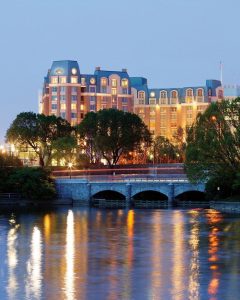 While the Mandarin Oriental’s Corporate Responsibility Team, comprised of a diverse cross-section of employees, knew that they ought to manage food waste more responsibly than directing it to landfill, the exact method for how to divert the material wasn’t clear at first. Several employees that had experiences at other establishments with conventional composting collection programs where organics were source separated on-site and hauled to a compost manufacturer were wary that it may be difficult to find space for food waste to be held separately from trash and had concerns over potential odors and flies if pick-up couldn’t be arranged at a high frequency. Exploring other options, including technologies that could divert food waste “down-the-drain”, it became clear that biodigesters or liquifiers would be a logical choice for their ability to almost entirely eliminate odor and pest presence, as well as process material with a very small footprint.

ORCA units in particular were an intriguing option, because units could be purchased with a turn-key service that included installation of the systems and same or next-day service for any acute problems, in addition to every-other-month check-ups on the systems. Ensuring that robust service plans were offered was important to the Mandarin Oriental in order to set their foodservice operations teams up for success. And now, approximately two years into their ownership of the G25 ORCA unit that processes 600 lbs and the G50 unit that processes 1,200 lbs in 1-2 days, the hotel has been very happy with their decision and had the opportunity to reflect on their successes and to date.

With two primary points of food waste generation, Mizuno explained that the hotel was keen to place a unit both in the kitchen and a unit near the hotel’s conference and banquet space. Ironically, the smaller G25 unit placed in the kitchen processes the most food by 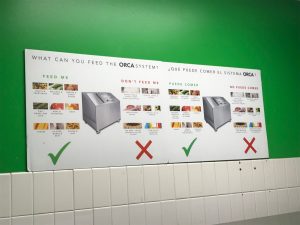 volume and the larger G50 unit processes a relatively smaller portion of food waste. Yet, both ORCAs have been able to accommodate all of the food waste generated in the respective zones without reaching the maximum thresholds during its continuous operations over the course of a given day. The dual placement strategy enables staff to easily dispose of food waste once plates are cleared from the conference areas before bringing empty plates and flatware back down to the kitchens for cleaning.

Mizuno explained that early on, the teams interacting with the ORCA systems had a series of hiccups that provided valuable learning experiences. For instance, their teams realized they needed to add more rigor to their sight-checking and de-plating when scraping food waste off of plates when errant forks and knives made their way into the machine. One larger isolated incident occurred when third-party cleaning staff accidentally poured an entire fryer’s worth of oil into the machine. Luckily, the machine was able to be serviced quickly with ORCA’s impressive service plans in place. And, on an ongoing basis, helpful signage provided by ORCA directs staff in both English and Spanish to ensure only items that the ORCA can process make it into the machine.

After acclimating to the added stage in daily operations, staff have seamlessly integrated the disposal of food waste in both the kitchen and conference areas. Staff are instructed to place food in the main opening and then spray the sides with water to remove any food that may have stuck to the upper portion of the machine where the rotating paddles don’t reach. Once closed, the paddles rotate about 3 times per minute to introduce oxygen and the ORCA will spray microorganisms into the mix to aid the digestion process. These microorganisms thrive in a moist environment and in the ORCA unit’s bodies, which are filled with black “bio chips” that are about 1 cm plastic cylinders that help support the microorganism populations and also help physically break down the food waste. During the ORCA’s bimonthly service check-up, representatives replenish the microorganisms.

The effluent of the Mandarin Oriental from its two ORCA biodigesters typically looks like broth, rather than water, and grease traps are placed at the junction to the sewer system to protect the infrastructure from fatty materials that can harm the pipes. Since the hotel is located in Washington, DC and the city’s older infrastructure includes combined sewer systems, severe weather events may jeopardize the pathway that liquified food waste may take to reach the treatment facility. Though with the Blue Plains Advanced Wastewater Treatment Plant servicing the city and the surrounding counties, the hotel is assured that once the food waste is liquified and reaches the facility, it’s treated and then land applied to agriculture in the region, recycling nitrogen and phosphorous back into local soils.

In all, the Mandarin Oriental is now confident that the sustainable management of their food waste has now leap-frogged their longer-standing recycling program for conventional recyclables.