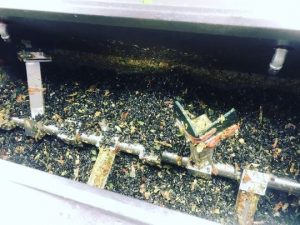 Colorado State University has a new way to eat up leftover food waste this school year.

The university has added an ORCA brand biological digester — the Canadian-made system houses microorganisms that break down food waste into a disposable liquid.

The technology is part of the $11.2 million renovation project to the cafeteria at Corbett and Parmelee residence halls. It’s also part of a campus-wide effort to become completely carbon neutral by 2050.

Since the CSU dining halls feed about 12,000 meals daily, food waste poses a significant challenge in reaching that goal.

“We are working to send less to the landfill every year,” said Tonie Miyamoto, director of communications and sustainability for CSU housing and dining. “… We will need to be at zero food waste (to reach the 2050 goal).”

It can accept most food waste items with the exception of meat bones, large pits, corn husks, coffee grounds and oils — staff has learned to avoid some items through trial and error.

Dining hall employees handle all of the digester feeding. The excess liquid produced is then dumped down the drain.

But the digester isn’t the only system used by CSU to decrease food waste.

Campus dining halls have been using different composting methods for the past seven years and have composted 1.3 million pounds of food waste in that span. Many of the waste items that can’t be fed to the digester can be composted.

The compost is used in CSU landscape projects and also donated to community garden projects. Soon, compost will be available for public purchase through CSU’s surplus store.

CSU dining halls save oils and greases so they can be turned into biodiesel fuels, recycling 156,554 pounds of oil since 2013 — including 23,469 pounds of recycled oil during the 2017-18 school year. The oil can be modified with chemicals or mixed with diesel fuels to power particular engines.

Unused foods that aren’t ever put out for consumption are donated to the Food Bank for Larimer County. CSU typically donates between 30,000 and 60,000 pounds to the nonprofit every year.

Students are also educated about food waste each semester. During the week of Earth Day, all of the food waste is put on display before it is disposed.

“The visual of seeing it is very powerful,” Miyamoto said

Miyamoto said the education leads to improvements each year.

Food waste audits are conducted over a week span in each of the fall and spring semesters where all of the food waste is collected and measured. Students typically improve from an average of a half cup of waste per person in the fall semester down to a quarter cup per student in the spring — a savings of about 3,000 cups of food waste per day.

In other strategic tactics to reduce food waste, trays have been removed from the dining halls and portions are carefully dished out to plates and bowls.

“Our facilities are all-you-care-to-eat, so if you want more you can get up and get more,” said Lucas Miller, CSU’s associate director of dining services. “If we just start piling food on plates we know it won’t all get eaten.”

And while CSU has employed different strategies to reduce its waste, the dining halls are brainstorming further ways to help the university reach its zero-waste goal by 2050.